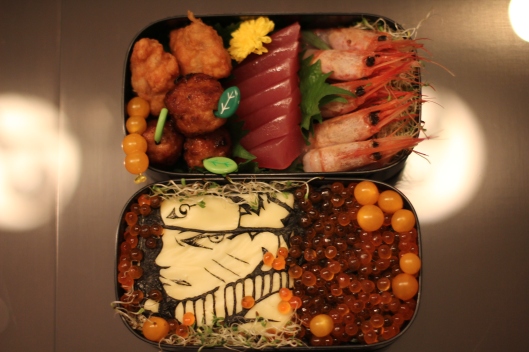 So for my next bento, I did a Naruto Kyaraben seaweed art. Again, I used the same tools as before but its easier this time around as the ingredients required for the seaweed art is only cheese and seaweed. I thought ikura would be perfect for giving him that volcanic bubbly nine-fox demon effect so I added that in as well. It helps that I love ikura 😉

Tools used are the same as before or maybe less… :  cutting mat, cutter for intricate designs, paper, pen/pencil, binding clips 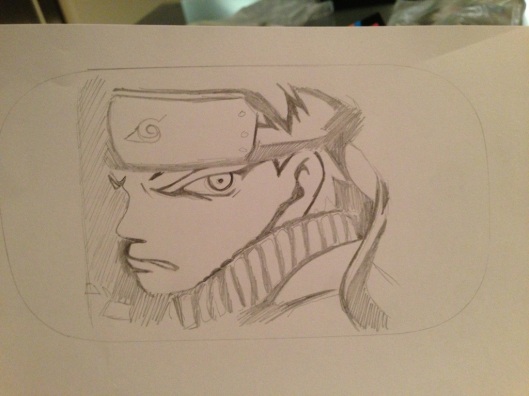 So first, you draw an outline of your bento so you can draw your design within these boundaries. And then you draw your character, emphasizing on the black areas. You will cut out only the white bits. I think I shot myself in the foot by finding a drawing so intricate that it was difficult to cut the white bits properly T___T 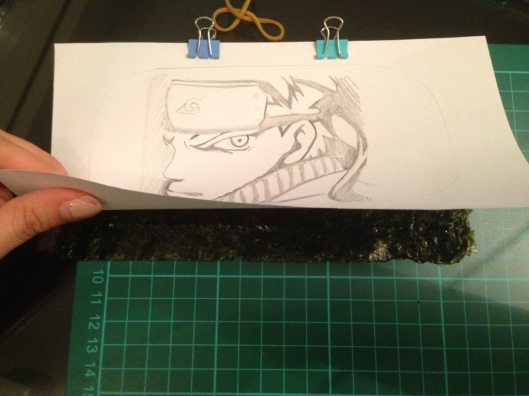 Next, place the sketch over the seaweed on the cutting board, and clip paper and seaweed securely onto the board. 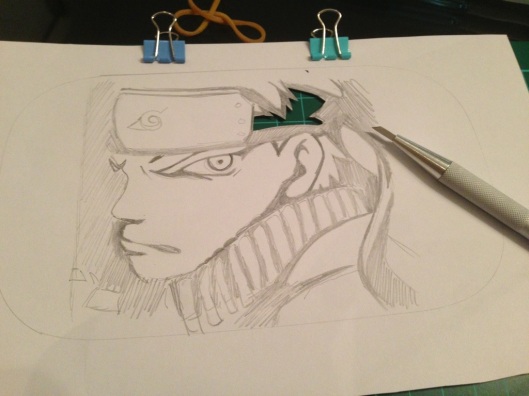 Start cutting the white bits. That is the cutter I used. I initially used a ceramic cutter but this is way easier. 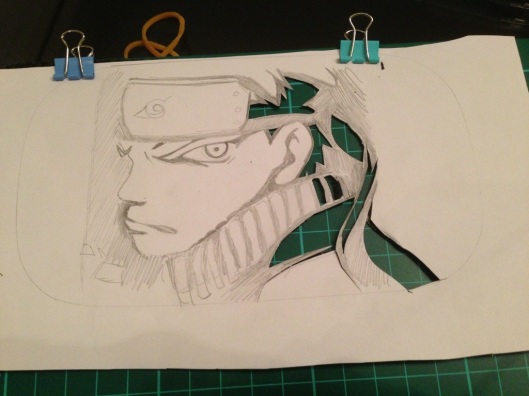 And continue the cutting while removing the seaweed bits at the same time. It will be easier to keep the board free of excess paper/seaweed moving around. 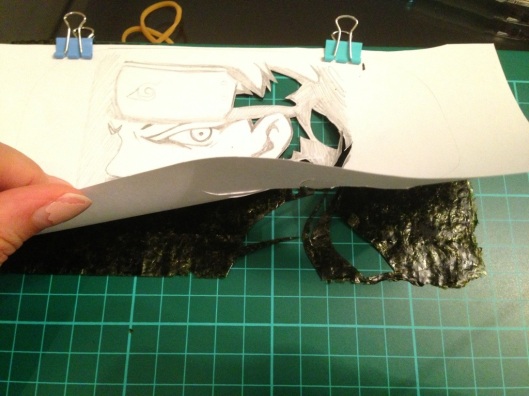 You can see here that the patterns are starting to develop on the sheet of seaweed. 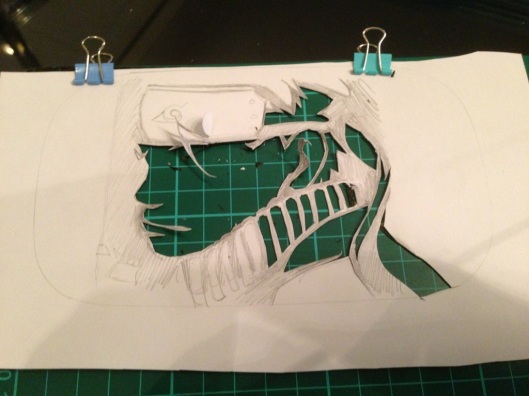 I suggest cutting the smaller bits first before you cut the large areas. This is because its easier this way and will result in less tearing of the seaweed. 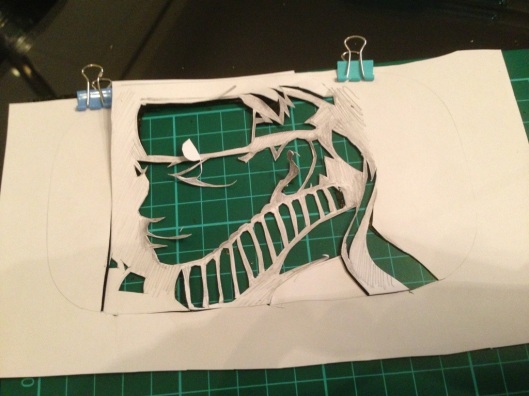 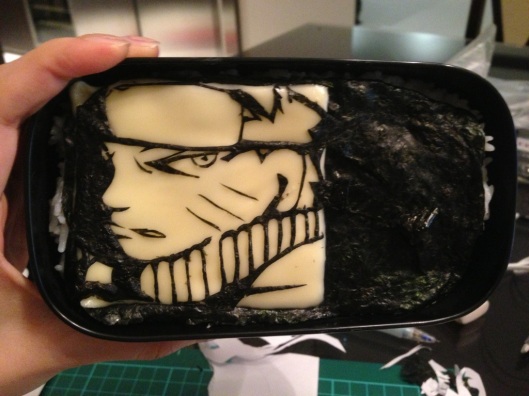 I put some rice into the bento, topped with seaweed and placed the slice of cheese where I wanted it. I’m not sure if it was a lucky mistake that I placed the cheese on the rice while it was still hot! So basically my cheese was warm and sticky such that anything that stuck to it cannot be removed! Therefore if you mess up the placement of the character here, its all ruined! On the bright side, the seaweed is more adhesive and very unlikely to fly away. 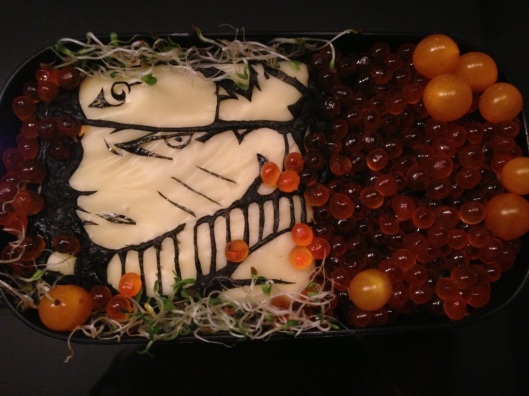 Once you’ve stuck the seaweed character onto the cheese, build your bento! Ikura against a dark seaweed background lends a little mystery to the overall effect 😉 and the tiny yellow tomatoes were just there to contrast with the smaller ikura. 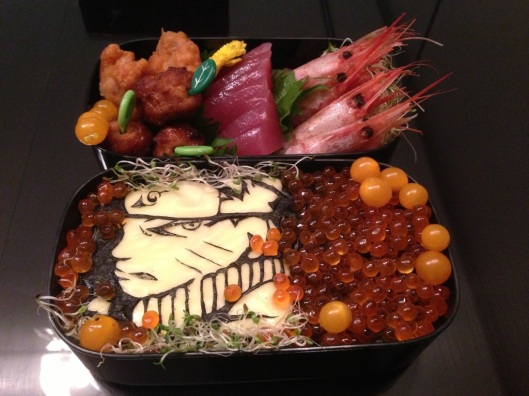 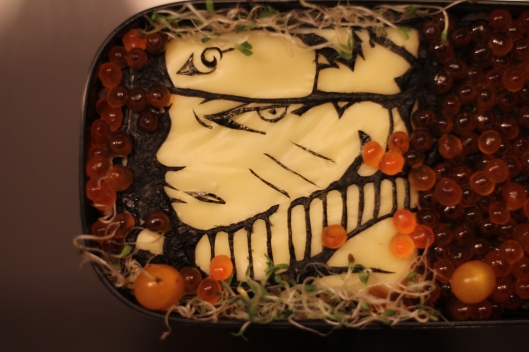 This bento is made for immediate consumption because there is no way you can put sashimi in a lunchbox and expect it to keep well in room temperature. Bacteria and all. 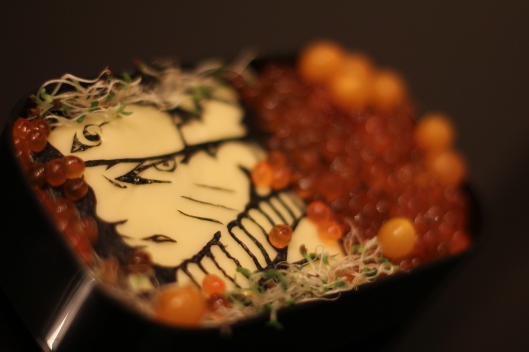 So yes, devour once you’re done with your pictures! 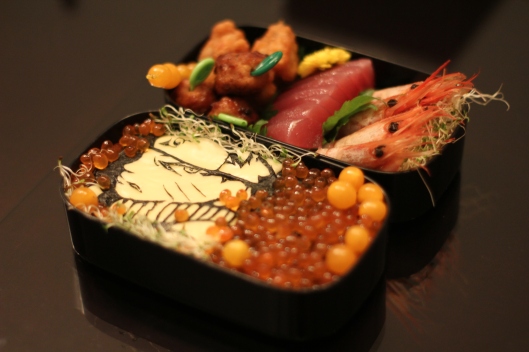